MQA is a set of processes, encoding technologies and other technologies to make the music you listen to (streaming, in a file, or from CD) sound better – potentially much better. Its backward compatible with things like CDs so in the future a CD that plays on your regular player will “play even better” on an MQA enabled player. The same guys who did the audio specs for DVDs worked on MQA.

Traditional CDs are recorded with a fidelity of 44.1kHz at 16bits using Pulse Code Modulation. The 44.1KHz is how often a sample is taken, and 16bits are used to quantify the amplitude of the sound.

44.1kHz is “enough” to reconstruct frequencies all the way up to 22kHz, which covers human hearing range, usually expressed at between 20Hz and 20kHz.

Some audiophiles look for music sampled at 192kHz with 24 bits to improve the sound, but a lot of folks don’t hear a difference (see 20kHz thingy above).

It turns out there is a difference, but not in the frequency range heard so much as the timing of when a sound happens and the aliasing incurred by the required filters that smooth out the waveform reconstructed from he digital data.

When you’ve encoded a wave as below:

You need to reconstruct it from the values recorded at each dot. As a result of not having an infinite number of dots you’re going to have to use some filters to smooth out your curve. Thats great except when it comes to, as an example, a cymbal crash.

The result of the filters is that at a small timescale, “blurring” happens for sound, and specifically “pre blur” happens as shown below. There is no “clean start” to a sound. As you can see the opposite happens following the sound, and filters cause the sound also to persist unnaturally. 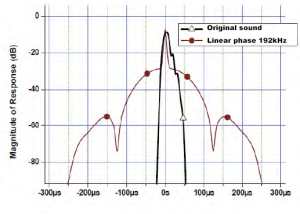 You can’t normally hear stuff at the frequency of 192kHz at the top of the spectrum, but your brain is tuned to timing and taking lower frequency music and slicing it at 192kHz makes it cleaner.

This “cleaner” sound is not audible as frequency (your filters take care of this) but it does make a difference to the timing of when a note and sound hits one ear vs the other and whether its mushy at the start and finish (as seen above in the graph).

It turns out we can hear the difference between a sound arriving in one ear or the other at a resolution of 7 microseconds. At 48Khz the temporal resolution (time between samples) is 20.8microseconds, almost 3x our hearing fidelity. At 96kHz its 10.4microseconds – a little under 2x. Finally at 192kHz sampling the inter sample time is 5.2micro seconds.

So THATS why those nuts want 192kHz – for spacial, “being there” sound.

Now, we won’t go into headphones, speakers and the like here, but if your speaker diaphragm is mushy this isn’t going to help you anyway.

Another feature of MQA is the inclusion of data about how the stream was moved from Analog to Digital including information that helps the decoders compensate for any issues introduced as a result of the encoding/mastering schemes. I wont go into a lot of detail here, but the information from the MQA endoding, and decoding phases and hardware are taken into account by the player to apply settings that help correct for a variety of factors affecting the sound,.

What, now I haver to change my player?

Nope. MQA was designed to use free space in the stream (As an example, 20 bits are enough to encode the volume we needed but because of how computers digitally handle data, its rounded up to 24.. likewise 20kHz is the top end human hearing, but its rounded up to 22kHz)

So basically a CD will contain the baseline “cd quality” music with some hidden data at least > “2kHz/4bit” rate to encode the additional data that will allow MQA compatible players to (as it turns out rather significantly) improve the sound.

Can I hear it now?

No, there are currently zero MQA tracks that were end-to-end MQA created, so we have to wait for proper end-to-end created music to actually experience what this may be able to do.

Re-encoding an existing recording is likely to do nothing since the original baselines of types of equipment and compensating data will be missing at very least.

Warner Musc and Universal music are in, so once NEW stuff is released including the full MQA pipeline, we’ll maybe hear what this hype is all about.

This is a hopelessly simplified and simplistic version…The best long-form discussion video I have found on the topic is from Hans Beekhuyzen here – if I have peaked your interest, take a look.